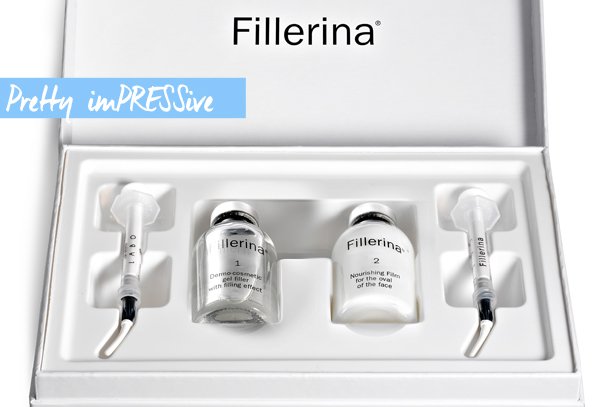 Respected beauty journalist Alice Hart Davis recently put Fillerina’s {Filler Treatment} to the test, and was bowled over by its skin-rejuvenating benefits.

In the feature she wrote for The Daily Mail, Alice subjected this ‘non-invasive alternative to Botox’ to a two-week, intensive trial – and the effects were measured by a specialist ‘skin laboratory’, who assessed the results with a Cortex machine – state-of-the-art skin analysis equipment. The findings? Well, according to Alice, what this machine revealed was ‘little short of amazing’.

For two weeks, Alice painstakingly applied the 14 day intensive {Filler Treatment} – squeezing 1ml of clear gel along her deepest wrinkles (forehead, crows feet and the sides of her mouth). She then swept another 1ml along her cheekbones and around her lips.

After waiting 10 minutes for the gel to absorb, she applied the Phase 2 ‘Nourishing Film’ to ‘seal’ the gel in, as advised by the product’s instructions.

After the recommend two weeks of this ‘gel and film’ routine, she spent a further fortnight applying the brand’s {Day Cream} and {Night Treatment}, before turning up at the ‘skin lab’ for her (somewhat scary sounding) ‘final assessment’.

‘I thought my skin was looking good, but what the Cortex machine told me was little short of amazing’, wrote Alice, while Tariq Karim, director of the Santi Skin Lab, discovered ‘a remarkable change in skin structure’ and that ‘the skin on the forehead show[ed] a particular improvement’.

Alice’s skin’s hydration levels had increased by 29%, while ‘elasticity’ demonstrated a remarkable 22% improvement, within just four weeks. Her skin’s density had also increased by 4% on average – however, Mr. Karim believed this was due to the enhanced hydration levels, which had literally ‘plumped’ the skin up.

‘Obviously, it’s not the sort of ‘filling’ effect that you get with injectables’ wrote Alice, ‘but it is a clear and measurable improvement. After years of writing about the beauty business, I have learned to take hyped-up promises with a pinch of salt, but I have to say I am very impressed. Starting at £79 for a two-week course, it is expensive, but that’s far less than the cost of injectable treatments. It’s also pain-free and non-invasive.’

Kool from Korea: products tipped to trigger an…

7 simple ways to make your week much better