Back from a sabbatical (and wearing a shiny new outfit), Sunday Riley’s {Good Genes} has a new name – and a fancy formulation. So, for all those who’re wondering what’s new with GG, here’s everything you should know…

No longer just Good Genes, it’s now gained a loftier title: {Good Genes Glycolic Acid Treatment}. It’s also evolved to comply with the powers-that-be (EU regulations are different to those in the U.S. of A., which is why the ‘old’ formula needed a re-jig). 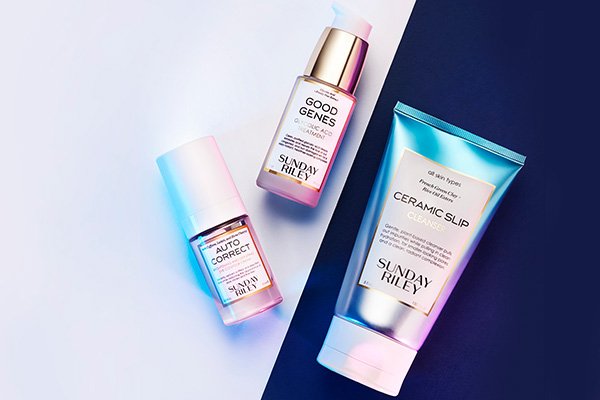 The EU now stipulates that no lactic acid treatment with a 10% concentration (or a pH that’s lower than five) can be sold in its territory, which is why your beloved refining and brightening treatment has had to be tweaked but, remember… a change can be good as a rest, so there’s no need to feel disappointed…

The team at {Sunday Riley} have been formulating tirelessly, to develop a treatment that works without bending the rules. So, instead of the ‘original’ formula – lactic acid at 7% with a pH of 3 – the ‘new’ EU formula swaps the lactic for glycolic (another member of the alpha-hydroxy family), at the same 7% concentration, with lactic acid salt at 3% and a pH of 3.5.

What does this gobbledegook mean? Well, it’s confusing but basically means that your glow isn’t going anywhere. A larger molecule, lactic acid operates on quite a superficial level – ‘gobbling’ the surface scurf that compromises radiance (with minimal risk of irritation). Glycolic is smaller (and therefore penetrates more deeply), where it not only resurfaces, but also stimulates regeneration and creation of the collagen that keeps skin firm and supple.

Its smaller size means glycolic can trigger reactivity more easily, but Sunday Riley have buffered their {Good Genes Glycolic Acid Treatment} so you can get the benefits without the ‘burn’. Sure, it tingles when applied but doesn’t cause the irritation that so many will associate with GA formulations.

Unlike its American cousin which promises to “exfoliate dull, pore-clogging dead skin cells to instantly clarify and reveal smoother, clearer skin”, the new incarnation promises to “revitalise the appearance of dull, congested and sun-damaged skin without compromising on what matters to you most: safety, quality and fast results. {Good Genes Glycolic Acid Treatment} penetrates the surface of the skin with tiny glycolic acid molecules, to break apart pore-clogging debris and repair the look of sun-damaged, congested, wrinkled or dull skin. With just one use, radiance and skin clarity are visibly boosted.”

Sounds good and… is good. Although no one is thrilled by change, this evolution is grrrrrreat. Good Genes 2.0 (as we’re affectionately calling it) is brilliant for tackling the swathe of common bugbears, so don’t be disheartened – you’re in for a treat.

The hero hair accessories you never knew you needed

See Your Skin Safely Through The Summer

Don’t wait ’til payday to shop these new…

What’s your cult product of the year?