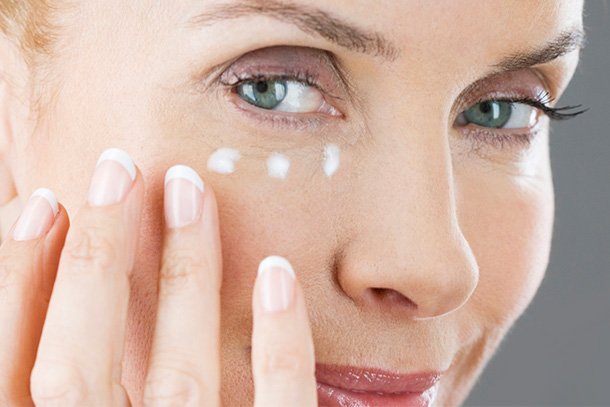 {Georgia Gatsby}, our discerning contributing editor, is back to talk you through the best eye creams she’s found to combat bags, crow’s feet and ‘crinkles’…

“As the owner of a pair of crinkly eye-bags, I’ve often fallen for the extravagant promises of eye creams sold in department stores. And the truth is that I’ve never found one, not one, that did much more than moisturise. They’re a waste of money, in my view; you may as well buy the cheapest at Boots.

But the four eye creams that I’ve been testing over the last year are something else entirely. Certainly among the best on the global market. Annoyingly, the most expensive is probably the most effective, though they all moisturise, tighten and de-puff.

I actually started using this one two years ago, and then happily re-ordered. Its chief selling-point is that it magically erases those crêpey half-moons under your eyes within seconds, and it does this better than any other eye cream I’ve tested. Quite fun to watch. The effect won’t last all day – you need to start again if you’re heading for a night out.

Sorts out mild puffiness. Quite moisturising – though if your under-eye area is severely parched, there are probably better options.

Tip: you may get some redness for the first few days. Don’t worry – this will go as your skin adapts. Also, use sparingly. I didn’t at first – and ended up with panda eyes from mascara migration. Comes in a generously-sized glass bottle, with a pump that allows you to squeeze out just a smidgeon.

You’re not the only one gulping at the price of this one. I mean, what’s in it – ground diamonds? Well, according to the makers, it actually contains diamond essence, whatever that may be. I do wish that the beauty business would get to grips with plain English.

But, but, but… this delicate cream is quite astonishing. Of the four, it was the most moisturising by a mile – so a perfect plumping remedy if you suffer from a crinkly, dehydrated under-eye area. Use it for a week, and you may wonder how you ever did without it.

Like the {Sunday Riley}, it also does the instant wrinkle-erasing trick – though in my view Sunday Riley has the edge. And it moderately de-puffs.

Must be used sparingly, so it should last a long time. The cream sinks in immediately, leaving no residue. Small glass bottle with a good pump.

Please see my previous {blog} on DNA products. And here’s the update: I’m now a total convert. The products have all been formulated by Dr Moy, a leading dermatologist and research scientist in Los Angeles. Scientific trials are still underway, but early results indicate that his unique cocktail of ingredients helps to reverse sun and pollution damage at a cellular level.

This cream’s slightly thinner than the others. I find it more moisturising than the Sunday Riley, though less so than the Julisis. Again, it does a reasonable job of de-puffing and wiping away crows’ feet.

If, like me, you have sun damage (papery wrinkles, freckles, etc) under your eyes, this may well be the one for you. Comes in an attractive blue plastic test-tube with a good pump.

The organic option. Did I hear a faint groan? If you haven’t yet joined the green cosmetics revolution, it’s probably because too many of them aren’t all that effective – not compared with their wicked sisters, anyway. SkinOwl, however, certainly holds its own.

In consistency, this is more of a gel than a cream. I particularly like the fact that it’s designed for the entire eye area, so you can use it right up to your brows without risk of spots or puffiness. Surprisingly moisturising, and moderately good at de-puffing and de-wrinkling.

Tip: keep it in the fridge for more effective de-puffing. Can also be patted over the entire face as a lifting pick-me-up before applying make up.

Top Skin Care Tips For Women In Their 40s

Unleash your alter ego with the world’s…

Vita Liberata’s Trystal Minerals: Before & After

Why you need to incorporate black tea into your skin…

Top skin care tips for women in their 20s