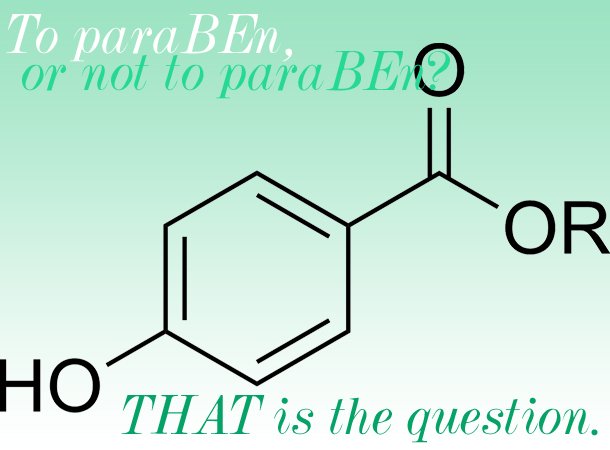 Where once our Elizabethan counterparts spent their days fretting about whether “to be or not to be”, our contemporary selves are plagued with far less existential concerns. To text or not to text. Tweet or not to tweet. Buy, or not to buy? And, the one that the beauty industry has had a furrow in its’ forehead about for some time now; should parabens be used as preservatives in cosmetics? To paraBEn or not to paraBEn. That is the question.

The ‘paraben debate’ is something that has had the brains of the beauty business slapping on their war paint since the suggestion was made that their use in skincare and cosmetics could be linked to breast cancer. The ‘precautionary principle’ – also known as ‘scaremongering’ – is based on the premise that if it might, it probably will, so don’t let it. However, how can we adopt that outlook in some instances and not others? Surely, with such a dim view, we should all be banged up for plotting to overthrow the monarchy / pinch a Mars bar / murder our siblings / (insert crime here…). Whatever happened to good old, innocent until proven guilty?

Once thought to be a relatively inoffensive cosmetic preservative, parabens have been courting controversy and now things are getting heated. No longer the cosmetcic industry’s darling, they have had a serious fall from grace in recent years, following a scientific study that found preservative chemicals in samples of breast tumours; evidence that is supported by parabens’ ability to mimic oestrogen, a hormone that is known to play a part in the development of certain cancers in both men and women. As parabens are used in all manner of beauty products, including anti-perspirants, some speculators are suggesting that parabens could migrate into breast tissue from the underarm area and contribute to the development of these tumours, however, there’s no reason to go ‘au naturelle’ just yet – so far the findings are far from conclusive.

The American Cancer Society has advised that there is no real scientific evidence to support the notion that products such as deodorants increase one’s risk of developing breast cancer. In fact, some scientists have claimed that we currently ingest a far higher level of parabens through our food, than we are exposed to through the use of cosmetics. Plus, with regard to their oestrogenic effects, experiments on butylparaben revealed that it was 100,000 times weaker that Estradiol (the primary oestrogen), and this was at a concentration 25,000 times higher than that used to preserve cosmetics.

However, as with most chemicals, nothing is certain. It takes time for compounds to reveal their various secrets and sometimes, a thorough scientific investigation can be like opening Pandora’s box. Compounds can have miraculous short term benefits, but we have no real concept of what they could be doing in the long-term (whilst praying they’re making us age backwards).

So what should we do? Well, if industry experts are to be believed (and it’s worth remembering that often these chemical trials fall to universities, who have no invested interest and thus no reason to pull the wool over our eyes), then parabens are good at their job and pose no serious risk to our well-being. Without them, we’d be keeping our face wash in the fridge and replacing our moisturiser as often as our coleslaw (…mould mask anyone?)

Still, if you’re concerned, then the good news is that ‘natural’ alternatives can be found, look out for Sodium Hydroxymethylglycinate and Grapefruit Seed Extract on ingredient lists but beware; although the former is derived from a naturally occurring amino acid and Grapefruit Seed Extract sounds like something you might have for breakfast, both substances undergo a myriad of chemical processes to make them suitable for the job and one could argue that if this constitutes being ‘natural’ then they are scarcely better than parabens which are derivatives of ‘natural’ benzoic acid.

Get the Look: Valentino Couture AW13

How to: get rid of dark circles

Got Acne? Reveal Flawless Skin with These Masks

This game-changing range will sort your skin out

A definitive guide to the most-wanted lip wear