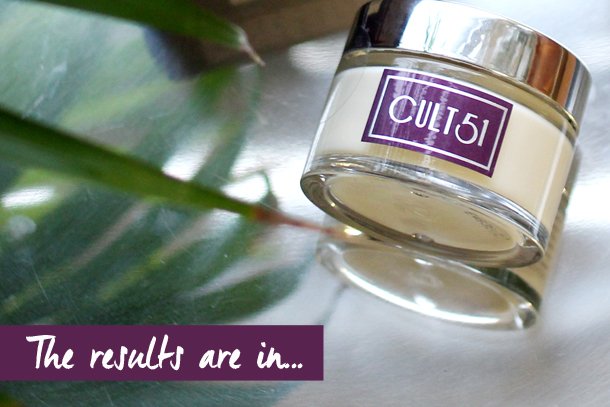 Cult 51 {Night Cream} and all new {Immediate Effect Serum} (coming soon to Cult Beauty) have revolutionised the anti-ageing industry, with cutting-edge ‘3D’ formulas which tackle the causes of skin cell degradation, to totally transform the texture, tone and ‘quality’ of skin. And following recent clinical studies, the findings were resoundingly positive – fully substantiating, and even exceeding the brand’s complexion-correcting, strengthening and youth-boosting claims.

{Cult 51} products work with your skin’s own metabolism – optimising cellular energy to enhance their regenerative, reparative and rehabilitative function (this is why your skin may temporarily change colour upon application).

In a recent trial, in which Cult 51 {Night Cream} was tested against a placebo, 100% of all panelists exhibited improved skin measurements across all criteria:

The ‘test group’ comprised 80% healthy females aged between 35 – 65, and 20% healthy males in the same age bracket, all with mild to moderate ageing of the face:

Skin barrier function, usually scores between 7 – 10 – the lower the number, the better the barrier. At the end of the trial, the average score was 5.98, with the best (being the lowest), an astonishing 2.71.

Hydration levels were up by 117% on average (181% highest) after 12 hours, and luminosity increased by 10% avg. (15% highest) after 6 weeks – a better result than many would expect from laser treatment.

What’s more, Cult 51 {Night Cream} was clinically proven to reduce melanogenesis by as much as 57% within just 4 days – a 22% overall brightening effect on average.

{Immediate Effect Serum} was similarly impressive. The findings, when tested on a panel consisting of 87% healthy females and 13% healthy males – all aged between 35 and 65, the following skin-improvements were observed.

All panelists had their skin ‘measured’ under laboratory conditions before commencement of the trial, after 1 hour, after 12 hours, after 4 weeks and then after 6 weeks, and the results were so incredible they prompted Danny McCamlie (Principal Investigator and Director, Global Project Management) to comment:

A brief (and interesting!) history of lipstick

Skin Care for Hair? The New Wave of Treatments Will…

The Cult Beauty sale is here!

Jouer Cosmetics in the Daily Mail