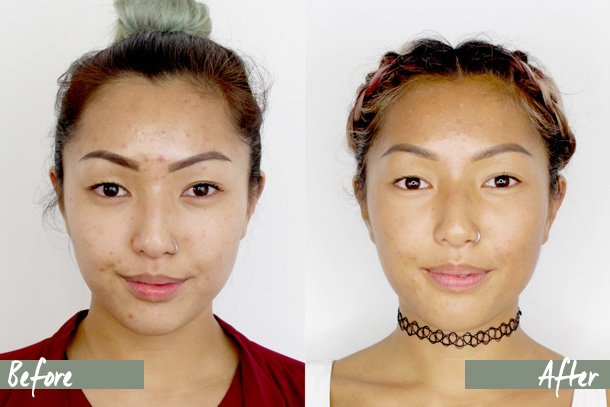 ‘I’m far from a creature of habit and think it’s fair to say I get bored easily – everything from my hair colour (blue, green, pink) to my skin care routine is subject to regular ‘updates’ however, when it came to my complexion – the onslaught of product played havoc. My skin was in turmoil and my skin confidence? Virtually non-existent.

‘I’ve struggled with congested, blemish-prone skin since I first moved to London – whether it’s the lifestyle (too much fun) or atmosphere (too many toxins) or, a little bit of both, my skin’s been unsettled and has flatly refused to acknowledge my efforts. I’ve tried salicylic acid, AHAs and every ‘peel’ known to humanity on the quest to coax my skin into submission… but, no dice. It was only as things started to get progressively worse (and I became increasingly self-conscious) that I decided to try an alternative tack.

‘I heard rumblings around the office about Cor’s {Silver Soap} – something seemingly so simple that I seriously doubted it would work. I hate to be a ‘glass half empty’ girl, but having struggled for so long, I was sceptical (at best). However, like a good girl scout I did my research and took the plunge – anything was worth a try at this stage.

‘As part of the Cult Beauty team, trying new products comes with the territory. We’re encouraged to trial new arrivals in a bid to understand them and communicate their benefits from personal experience – hence it’s quite (very) rare that we stick to one cleanser/serum/day cream for a prolonged period of time. However, since discovering the joys of {Cor} and its phenomenal, antibacterial properties, I can say with all seriousness that I haven’t so much as looked at another face wash.

‘The key ingredient is silver – which, because of it’s antimicrobial properties, wages war on spot-causing bacteria. I’ve not stopped using this soap since I first purchased it – it’s cleansing but non-stripping and (as you can hopefully see from my make up-free ‘Before & After’) it’s worked wonders for my skin. By no means is my skin now flawless but the improvement is considerable; I still have some scars but they’re fading, and my self-esteem is definitely on the ‘up’.

‘It took me a month of using this twice daily to see noticeable results and now (as the office knows too well) I cannot stop raving about it. The after photo was actually taken just a few days before my period (sorry TMI?!), when my complexion is invariably at it’s most rebellious – and the fact that things stayed on a relatively even keel speaks volumes. I would wholeheartedly recommend {Silver Soap} to anyone whose skin is prone to breakouts or excessive oiliness – I cannot endorse it enthusiastically enough. It’s proof that skin care doesn’t have to be complicated to work miracles.

A 101 GUIDE TO DR DENNIS GROSS

Everything you need to know about the NARS Claudette…

The Sultry shadow palette that will be your next…

Dazzle Through December with a Little Treat-to-Self

Here to save your winter skin: Votary has landed