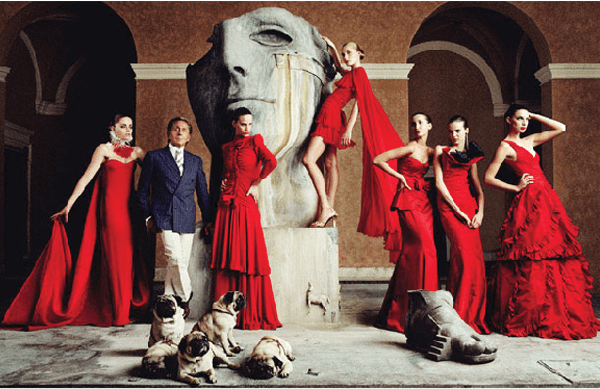 Rosso. Rouge. Red. Regardless of the language, the hue itself conjures up a bevy of symbolism. Frequently associated with feelings of love, while also maintaining an intimate relationship with danger…..The color Red brings order to an intersection, just as quickly as it instills fear within a nation.

Luckily, when it comes to style, Red is more of a one trick pony. A classic hue for anything from nails, to lips, to shoes, to dresses. A woman in red is never overlooked (much to the chagrin of Hester Prynne). Valentino may have had a hand in this. Designing for style icons like Grace Kelly, Audrey Hepburn, Jackie O and Sophia Lauren, timeless beauty is something that he understood, and red was a color he understood.

Such is evident at the Valentino: Master of Couture exhibit at the Somerset House (until 3rd March). Where 130 couture ridden mannequins pack the house at your runway debut. If catwalks aren’t your thing, catch an intimate glimpse into the life of Valentino as a man and vehicle for the most enduring suntan, through photos, letters and film.

Shortlisted for the Cosmo Blog Awards 2012

Cult Beauty is 9! Join the party…

Say no to faux pas with our self-tanning heroes